Using a smartphone app to measure your physical function

Blog by Ronny Bergquist, PhD student in the Geriatrics, Movement and Stroke (GeMS) research group at the Department of Neuromedicine and Movement Science at NTNU, Norway, and partner in the EU PreventIT consortium.

A switch from treatment to prevention is needed to meet the increasing pressure on the healthcare system that follows a growing older population and higher life expectancy.

Objective assessment of physical function can be an important step in empowering people to take responsibility of their own health and function, as it can create awareness of risk of functional decline and deficiencies in physical function with ageing.

Commonly used clinical tests of physical function at older age are the Timed Up and Go (TUG), Standing tandem, and Five times sit-to-stand. One challenge with these tests is that the measurement outcome, the time it takes to perform these tests, does not seem to be sensitive enough for detecting early decline in physical function in younger seniors. By instrumenting these tests with wearable sensors, such as those found in smartphones, one can extract movement features that provide more detailed information about test performance than total time alone [1]. 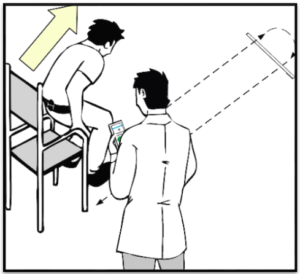 Figure 2: Sensor acceleration signals from a smartphone worn over the lower back, derived from the instrumented TUG. The figure shows rising from a chair (1), individual steps during walking back and forth 3 meters (2), and turning and sitting down on a chair (3).

These features include duration of specific phases (walking, turning, or sit-to-stand transitions), and one can derive further features such as velocity, sway, and jerkiness of movements, which inform about the speed, stability, and smoothness of the movements. Alice Coni, a PhD student at the University of Bologna in Italy, performed a study in which she found that features from an instrumented version of TUG and the ‘30 second chair stand’-test were more sensitive than total time alone for distinguishing between people with low and high function in activities of daily life.

The aim of my PhD is to develop – and assess the usability of – an app that allows people to administer and perform these instrumented tests on their own. We started out with a prototype-version of iTUG and Standing tandem developed by associate professor Sabato Mellone and his research group at the University of Bologna. The self-tests were included in the test battery that all participants in the PreventIT feasibility trial went through during the baseline assessment. Participants received a written instruction on how to perform the self-tests themselves, while the assessors observed without assisting.

The assessor recorded any errors that the participants performed with respect to both the use of the system, as well as the performance of the test. Based on the results from the testing during baseline, the tests were upgraded in order to enhance the user-friendliness, as well as adding a prototype for a self-test version of the ‘Five times sit-to-stand’-test, known from the Short Physical Performance Battery [2]. Now, 12 months later, the participants are using the upgraded version of the three self-tests as part of the follow-up test battery. The instructions for the tests are now included as video demonstrations in the app. The assessors will observe but not assist, and we hope to see that the upgrades we made have made the app more user-friendly, as indicated by fewer errors in administering and performing the tests. While doing these self-tests as well as the instrumented assessor-based tests, the participants wear a smartphone attached to their lower back, and sensor signals from these two tests will be compared for the two tasks.

Later this year we will arrange a usability workshop in Trondheim to which we will invite potential end-users of the self-test app. The goal of this workshop is to explore the end-users’ opinions on the usability of the app. With this information, we will continue to improve the app and continue make it more reliable and user friendly. In the end, the aim is to have a valid and reliable app-based test battery that is available for use in both a clinical- and the home-setting.